Before Neil Armstrong uttered his immortal “That’s one small step for a man,” as he became the first person to set foot on the moon, there was another NASA moon mission. Apollo 10, though overshadowed by the moon-breaking feat of Apollo 11, was perhaps an even more heroic story that imparted lessons on marketing, technology and life.

On May 25, 1961, President John F. Kennedy set a stratospheric goal for the country:

I believe that this nation should commit itself to achieving the goal, before this decade is out, of landing a man on the moon and returning him safely to the Earth.

While he wouldn’t live to see that day, this summer of 2019, we celebrate the 50th anniversary of the realization of that goal. The first moon landing from half a century ago was the culmination of the work of 400,000 men and women — the brightest minds of their generation — to create, run, maintain, repair, and reimagine the countless systems and subsystems needed to accomplish the moon voyages.

But just before the historic Apollo 11 mission came its critical precursor: Apollo 10. This was the dress rehearsal for the moon landing. Randy Bresnik, an astronaut who served on the International Space Station, called Apollo 10 “the consummate test flight.” He said, “They needed to get all the data, bring it back so that the next step could happen which was just two months later, the moon landing.”

When it comes to your B2B business, what’s your Apollo 10?

Launched on May 18, 1969, Apollo 10 was the F Mission. Commander Thomas Stafford, Command Module Pilot John Young, and Lunar Module Pilot Eugene Cernan pushed all of the components and procedures to their limits without actually landing on the moon. They set the record for highest speed attained by a crewed vehicle, Mach 37 (or 24,791 mph) which will not be surpassed until a crew is headed home from a Mars mission.

Lesson #1: Honor Those Who Take Your Product and/or Company to New Heights

The Silver Snoopy Award is the highest honor bestowed for flight safety and success. This idea meant so much to the crew of Apollo 10, they named their craft after Peanuts characters and Charles Schultz even created custom works of art that flew into space with them. 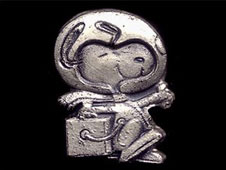 The Silver Snoopy is the astronauts’ award presented by the crew to the individual who contributed the most to human space flight for that mission. A staff member must meet two of the following criteria:

The lapel pin flies in space and returns with the astronaut before it is presented to the staff member.

Application: When your company gets a major funding round (or goes public), your next product launches, or you receive a major PR placement, how can you honor one or more on your team who contributed to but are perhaps not as visible in the process?

Lesson #2: Map Out Everything

The mission of Apollo 10, according to Mission Commander Thomas Stafford, was “To sort out all the unknowns and pave the way for a lunar landing.” Throughout the mission, they mapped every crater and boulder they could, discussed new discoveries not seen by telescopes and prior missions, and gave first-hand reports of the planned landing site of Apollo 10.

In the process, they highlighted new vistas to explore and new ways to accomplish future work.

Application: As you work on your company or your next product, write down, take photos, capture video, and record audio of the steps along the way. Even if you don’t think you will use them, they might point the way to where you need to work next. Don’t forget to also capture the “why” of every step in your journey. The why behind each decision is important and will help you make better decisions in the future.

Astronaut Bresnik noted something else about the Apollo 10 test flight. He joked, “And so, imagine General Stafford and Gene Cernan in Snoopy [the nickname for the lunar module]. They’ve come 250,000 miles from Earth and all of a sudden now they are nine miles away from the surface; I mean, if the moon had grass they could kind of reach their hand out the window and kind of touch the blades. They were that close.”

All of NASA knew these astronauts would be sorely tempted to make the first moon landing. So NASA did what they could to make sure these veteran astronauts wouldn’t deviate from the plan: they didn’t give the lunar boosters enough fuel. They could’ve landed, but they never would’ve made it back to orbit. Talk about forethought.

Application: There is a fine line between gathering the courage to go to market and the wisdom to wait a little longer. You’ve got to walk that line. All of NASA did it by keeping the main mission goal in front of all players, including the crew. How can you keep your team focused — and humble — to avoid a catastrophe?

Lesson #4: Pay Attention to the Mistakes Along the Way

Every manned space mission had hiccups and challenges.

On Apollo 10, when the Command Module, nicknamed Charlie Brown, docked with the Lunar Module before insertion into lunar orbit, the force of the two craft colliding, even though controlled, sent a shower of fiberglass particles through the command module in zero gravity. The bump shook the insulation loose.

Once in lunar orbit, they struggled to get the pressure correct in the docking collar and tunnel between the two modules. This caused a slight torquing, or rotation, of the lunar module against the command module. It also put at risk docking upon return from the lunar module’s reconnaissance trips around the moon. Stafford and Lunar Module Pilot Eugene Cernan were already in Snoopy when Young pressed the command to vent the tunnel. Stafford and Cernan were essentially holding on to their trip home by three small pegs or probes. They finally got the pressure to vent but not before rotating 3.5 degrees.

Reflecting on the mission, Stafford said, “Coming back in [I thought], ‘I sure hope those three little capture probes work.’ if not, we’d have to do a spacewalk, an EVA [Extra Vehicular Activity], to get back into the command module, which would be rather a tough task.”

These two major problems and many other small ones were documented so engineers could fix them fully before Apollo XI.

Application: Are you pushing your company or product ahead so fast and hard that you’re causing cracks and dents along the way? Are you figuring those out so that the greater team can fix them before they become problems for your end users? 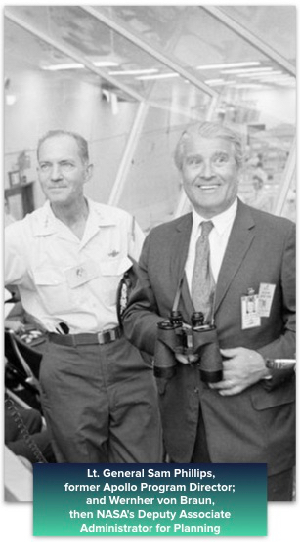 According to Stafford, a big part of NASA’s success throughout all its programs comes from lessons taught by General Sam Phillips, a World War II fighter pilot. He flew P-38s in dogfights against the Luftwaffe’s Messerschmitt 109s and ME-190s, then managed the B-52 program before being assigned to work on the Minuteman missile project, which in turn laid the foundation for our rocket program. Without the Minuteman, we wouldn’t have the Saturn V booster rocket that propelled the Apollo missions.

Phillips used common sense but also thought creatively. Minuteman silos had a single launch control facility with up to 10 silos spread miles apart from each other and launch control. The control facility would have soldiers and technicians, but the silos would be unmanned. How do you keep something so sensitive, and so spread out, secure?

Stafford remembers, “Boeing was the prime contractor so they had written up a plan, and they had a national security company to do their security. So they came up with a big book and had the thing all installed. This was it: certified. Well, you know, in software you do IV&V, independent verification and validation. General Phillips wanted to do an IV&V on the security of those Minuteman silos. So what did he do? Did he go to another security agency? No. He went to the Federal Bureau of Prisons and said I want the best bank robbers you have that are in your prison. And so he got eight convicts, and he said he didn’t want the ones who went into the bank with a firearm, he wanted ones who broke in mechanically. So they rounded those people up, they went out to the silo with guards and turned them loose. Now remember, this was guaranteed, nobody can get in there. And within 30 or 45 minutes those eight convicts were all over that Minuteman silo, in the umbilical feed rooms down at the flame trench, the whole thing. So they pulled them out and fixed all the deficiencies they could see. Then later, he sent them back in. This time it took about three and a half hours to get down in the Minuteman silo. They fixed those.”

Application: How are you doing independent verification and validation for your company or product? Don’t settle for someone who will only validate your biases and point of view. Bring in someone who can poke holes and break in so that you can learn what you don’t know.

Lesson #6: Don’t Give Up On the Problem that Would Lead to Failure

While the command module and the docked lunar module were orbiting the moon, the radar wouldn’t work. Without radar, the reconnoissance mission would be worthless, but more importantly, Stafford and Cernan could just as easily fly into the moon or miss re-docking and fly into space. Without radar, they’d be blind. After hours of trying procedure after procedure and engineers offering creative suggestions for solving the problem, they decided to scrub the mission and bring the three astronauts home. The dress rehearsal was a failure.

As a last ditch effort, they asked the astronauts to toggle the power switch for the radar. Turning something off and then on again worked to solve the problem. A routine fix to an everyday problem kept the mission on task.

Application: Don’t give up. If you hit a dead end, keep trying. Keep planning. Keep iterating. Keep moving. You had a great idea to begin with. Don’t let it go without exhausting every possible — even crazy — idea.

Apollo 10 is not remembered and celebrated by all. We don’t quote the astronauts, their books don’t become bestsellers, their stories aren’t made into movies, and the mission patches don’t sell for hundreds of dollars on eBay. But Apollo 10 was full of lessons learned that made history possible.

You are doing work on your company and products right now that will make history. Now is your Apollo 10. Adopt these lessons into your everyday life and see yourself moving closer to making your own kind of history. Soon you’ll touch the fine powdery surface of the unknown world you’re shooting for, only to look back and see you’re standing on the shoulders of the men, women, and lessons that got you there.